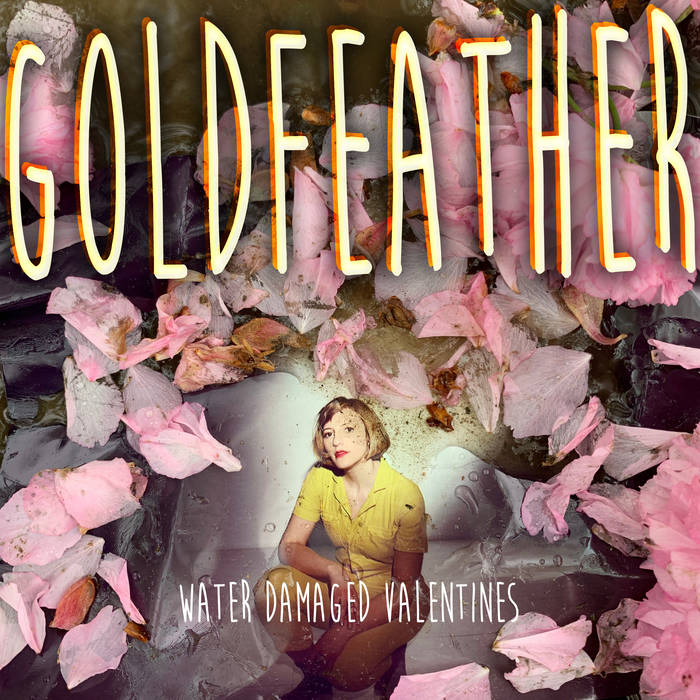 At once channelling the bare, emotional candor of Mitski and the divergent structural and stylistic craftwork of Sufjan Stevens and Of Montreal, Sarah Goldfeather’s eponymous band departs from its roots as an acoustic bluegrass quintet to embrace an amplified art-pop arsenal of synthesizers, vocal processing, and vivid production as a rock trio. The dazzling result is Water Damaged Valentines, a distillation of emotional outbursts, looping obsessive thoughts, and emotional rawness into tidal waves of fuzz, synths and soaring melodies. 8 tracks deliver jarring shifts, oblique textural motions, and agile lyrical delivery that vacillates wildly between muted passivity and overflowing desperation.

The creative process was multi-layered, starting with Sarah’s demo recordings, then incubated in rehearsal with drummer Robby Bowen (Boio, The Roofer’s Union) and guitarist Ethan Woods (Rokenri) and further developed in the studio of Grammy-nominated producer Mike Tierney (Judy Collins). Of the collaborative transition into uncharted stylistic waters, Goldfeather explains, “I started having ideas for songs that needed more oomph than a bluegrass quintet could provide. Ethan and Robby, and later Mike, helped show me that the world of amplified and synthesized sounds isn't so daunting, and it opens up an infinite palette of musical possibilities.”

GOLDFEATHER is a Brooklyn-based indie-folk-rock band led by Sarah Goldfeather. A bluegrass quintet that morphed into a rock trio with Ethan Woods and Robby Bowen, Goldfeather's music has been described as "full of light and life" (The Current, Minnesota Public Radio), "distinctive...whimsical" (The Boot) with "striking intensity" (Elmore Magazine) and "astonishing musicianship" (Impose Magazine). ... more

Bandcamp Daily  your guide to the world of Bandcamp